In 2018, What Must Employers Do to Attract Top Talent?

In an ever-changing marketplace, companies need to stay on top of their game—and their industry. To do that, you need to consistently acquire fresh talent and young employees that can learn from seasoned personnel while still bringing their new ideas to the table. Sometimes, however, that’s easier said than done.

The college graduates of 2018 have very distinct ideas of what they expect from you as an employer. To add to this, as they enter the job market, they’re looking for specific things from their fledgling careers that may differ from years past. They’re excited to join the job market, but they’re also looking to make the most of their first positions—and the salaries that come with it. They have a fresh outlook, an understanding of their own demographic, and they’re looking to make a difference.

In order to attract those young and talented employees to your company, you as a business owner or hiring manager need to understand what the class of 2018 wants—and how to best provide it to them.

Companies Should Emphasize Job Security to Potential Employees, Not Benefits or Perks

In the past, companies touted their in-house coffee shop, free gym membership or parking, and great health insurance to candidates hoping to get them in the door. Current college graduates entering the job market, however, have other things on their mind. They’re looking for more stability, not more add-ons.

According to a study done by LendEDU, over half of recent college graduates want to work for a company that offers job security. In fact, 55% of them were willing to trade benefits and perks for it. When asked what company aspect is most important to them when choosing a new position, only 9.2% said benefits were at the top of the list.

Why are so many new graduates suddenly worried about job security when only a few short years ago companies needed to offer a variety of benefits to get them in the door? The answer is stability in a potentially unsure economy.

New graduates have student loan payments coming up. While free snacks in the break room and discounted or free gym memberships are nice, what new and talented workers really care about is being able to trust that they can pay their bills and not have to worry about being laid off.

The high cost of a four-year education has forced many students to either keep living at home throughout college or even move back home after graduation while they look for a job. For some new workers, the position they take with you will coincide with them being truly on their own for the first time. They want to make sure that before they sign a year-long lease or otherwise commit to branching out on their own, that there is going to be a steady income for them. 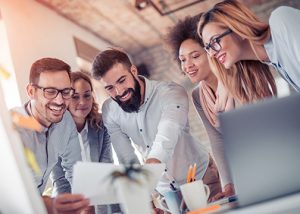 While historically competition in the workplace has often fueled creativity and production, today’s grads have a different outlook. Instead of fighting to be heard or having to compete for attention and recognition for their work, young workers want to be part of a collaborative team, in which their contributions are valued and respected. In fact, 44% of respondents in the LendEDU study said they’d rather be in a collaborative environment than a competitive one.

As the saying goes, if we weren’t getting paid, most of us wouldn’t show up to work; that’s why it’s called a job instead of a hobby. Recent grads are no exception—they want to be paid fairly too. It’s not, however, all that they want.

The LendEDU study showed that a big paycheck isn’t even close to the only thing on a new employee’s mind. For almost half of them, pay is the “most important” factor; for another 22%, however, it’s doing something they’re passionate about.

Something else they care a great deal about is training. They want to know that your company has a robust training program, there’s mentoring available—whether through an official company program or just as an informal setting from more experienced employees—and that they’ll be effectively taught to do their jobs well.

Why Employers Should Consider This Data

You may be tempted to ignore this data; after all, you’ve probably been hiring new talent for a while and there’s no reason to change your approach. The truth, however, is that you very well may need to if you expect to be bringing in the top new talents in your industry.

The Class of 2018 possesses new talent, ideas, and a fresh outlook. To stay competitive, you’ll need them.

ABOUT OUR GUEST BLOGGER: MIKE BROWN
Michael Brown is a Research Analyst at LendEDU, a personal finance comparison site based out of Hoboken, New Jersey. In his role, Michael uses both survey and publicly-available data to identify and analyze emerging personal finance trends, in addition to telling unique stories with original data. Michael’s work has been featured in just about every major media outlet, including The Wall Street Journal, The Washington Post, Forbes, Bloomberg, and CNBC. In his free time, Michael enjoys resting with his 15 year old dog Bosco, attending the world’s biggest horse racing events, and brushing up on his U.S. history.

If your company is ready to strategically address, improve and invest in the hiring of the most important part of any company – it’s people — contact us today!