The Importance of Thank You Notes

Our client had told us that the candidate had hit it out of the park during her interview – she checked off all the boxes, except one. Unfortunately, they did not receive a post-interview thank you note (via email), so they went with another candidate. The other candidate had similar qualifications, although slightly less stellar in the interview. However, he had taken the time to send a thank-you email to express his interest in the position, the projects they were working on going forward, and how he could contribute. Our client was direct and to the point – “No thank you note – no offer.”  A missed opportunity.

In 2019, Jessica Liebman, the Executive Managing Editor of Insider Inc., stated in a Business Insider article that she has a simple rule when she is hiring. “We shouldn’t move a candidate to the next stage in the interview process unless they send a thank-you email.” Liebman went on to state that bringing someone into your company is always risky. However, a thank you email (not snail mail – too slow) signals a candidate’s motivation and desire for the position and generally means they’re a “good egg.” There are only so many data points one can collect in an interview, she reasoned, that sometimes the thank-you note will make the difference in the selection of candidates. Our client obviously agrees.

She further clarified and stated, “To be clear, a thank-you note does not ensure someone will be a successful hire. But using the thank-you email as a barrier to entry has proved beneficial, at least at my company.” So, it makes sense, right? Not necessarily.

Unfortunately, back in 2019, and it continues today, social media went into hyperdrive to cancel her and her statements. Other hiring managers, reputable organizations (SHRM and LinkedIn), and publications joined the fray, with several siding in large part with those who disagreed. Liebman followed up with another article humorously titled, “Thank you for reading my story about thank-you notes!” to clarify what she meant a few days later. Many people were seemingly offended that anyone would actually “require” sending a thank-you note after an interview. She went on to explain she was trying to be helpful and shed some light and that, “The biggest factors we consider are a candidate’s talent and fit for the role.” It was a “rule of thumb” and not official company policy. 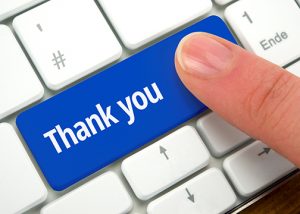 What are the disagreements with Liebman’s piece on sending thank you notes that continue today? Any online search regarding the necessity of thank you notes after the interview will bring up a lot of articles and pundits that say they are not necessary. For example, thank you notes are antiquated and pointless [apparently not to her and the many hiring managers and business leaders we talk to regularly at BEST]. Thank-you notes are to stroke the ego of the interviewer. Seriously? A thank-you note? The application and job description said nothing about sending a thank you. Liebman’s response was priceless on this point, “Neither is being on time to the interview.”

Our favorite? Expecting a thank-you note is elitist and shows discrimination and bias because many people have never been taught this skill. Diversity, Equity, and Inclusion (DEI) are critical to any organization today. Different perspectives can lead to increased creativity, innovation, productivity, better decision-making, and a better work environment and culture, among many other benefits. Since 2019, we have been through a pandemic and social justice movement that has brought DEI to the forefront in hiring. However, we have never seen it be used as an excuse not to be courteous and to send a thank you. Laziness would be a better excuse. After all, especially in a customer-facing role, would you want anyone on your team that doesn’t know how to say thank you?

But it’s a candidate’s market – you see the news – there are more jobs than people to fill them. So they [the interviewer] should be sending the candidate a thank you. We can concede this point to a degree in that all companies need to do a better job notifying candidates and letting them know why they did not get the position. Point well taken, and it is also something we strive for at BEST.

A lot of the consternation on this could be the culturally questioning and upending times we live in – where being contrary on social media is expected and merely aiming for “likes” and that all-important re-share. However, at BEST, we can only speak to our own experience working with clients and candidates and heartily thank those who disagree (because it is indeed helpful).

As business leaders, hiring managers, and recruiters, it is often about overcoming buyer’s remorse. When a hiring manager or company leader is getting ready to make a hiring decision, they are looking for those elements, however small, that can put a candidate over the edge and calm their fears about making a bad hire. For example, our client mentioned that they liked the candidate, but she had not sent a thank you. To the client, it was a reasonable expectation – another box to check. By sending a thank you note, the other candidate checked that box and received the offer instead.

For the candidates we work with, our resources stress the importance of the thank-you email. A candidate should always ask for the interviewer’s email address during the interview (whether on the phone or in person). Rarely, if ever, has it been questioned. After all, it is another opportunity to sell yourself to the prospective company. It doesn’t have to be a long note – say thank you, say that you want the position, and use it also to state why you are the best fit for the role (one or two reasons you are the best candidate for the job or maybe there was something you missed during the interview) and that you would welcome further discussion. Then, send it within 24-hours while you are still fresh in the interviewer’s mind. Is that so hard?

As the “Great Resignation” continues, there are already hiring and employment trends happening that would have been unthinkable just 2 years ago. During these extraordinary times – more gratitude and simple courtesies can go a long way. We have heard it said many times, “I like doing business with him or her because I like him or her.” The same can be said for assessing behavioral and cultural fit, bringing a new team member on board – and having one who is grateful to be there. So, as we enter the holiday season, a time of reflection and giving thanks, here is hoping the time-honored thank-you note and a spirit of gratitude is a trend that continues and grows.

Thank you for reading.

A 2021-2022 Employer Hiring Guide as the Pandemic Recession Subsides Change is the one constant in b...

BEST will be at the GROW Executive Summit and Talking Succession Planning November 9, 2021