Focusing on Youth in Hiring is Hurting Your Organizational Health

In the Fall of 1984, Ronald Reagan, at the time the oldest U.S. President in history, was in a fight for re-election. In his first debate with youthful challenger Walter Mondale, he appeared tired and lacking energy. Many began to question his stamina for the job.

In the second debate, he was asked a question about his age and being able to function in tough circumstances and in a crisis. Without hesitation, Reagan said the lines that we wish would be used more by older candidates seeking a job today: “Not at all… and I want you to know that also I will not make age an issue of this campaign. I am not going to exploit, for political purposes, my opponent’s youth and inexperience.”

He never looked back and won re-election in a landslide.

Underlying the humor of Reagan’s response (even Mondale laughed at the time) is the truth in his words. Do we, and organizations in general, consciously and/or subconsciously choose “youth and inexperience” over “experience and wisdom” to our detriment and even to the detriment of the younger employees we onboard? Are we missing training, coaching, mentoring, and even reverse mentoring opportunities that would ultimately lower turnover and benefit the entire organization? Is it time to rethink age in hiring, especially in the current “candidate’s market,” and get away from the misconceptions and perceived costs of hiring older workers and focus on the benefits?

In Search of Experience and Wisdom

“Age is an issue of mind over matter. If you don’t mind, it doesn’t matter.”  – Mark Twain

Most can agree that experience and wisdom are good things but there are clearly also times that age and health can lead to poor performance. On the flip side, performance in younger employees could be just as impacted by a lack of training (investment in your personnel), mentoring, and coaching, which could lead to increased turnover and impact the future of your entire organization.

We recently placed a 61-year-old candidate into a client that simply couldn’t ignore the fact she would make the entire department better. Instead of age being a negative, this particular person’s depth of work and life experience, high energy, and continual learning mindset, as well as the fact that she had been a coach and mentor to several in the same field for decades became a major positive. She didn’t need training— she was going to become the trainer. The client saw that this was a resource his many Millennials could tap into and concerns over age and longevity in the position were overcome.

Too often as business leaders, we look for “shiny and new” over “tried and true.” On the flip side, the disdain that many in the Baby Boomers and gen Xers have for Millennials (and vice-versa) is not a new phenomenon. In fact, saying that Millennials are more prone to leaving jobs and switching companies than previous generations is misleading. They leave jobs because they are young and new to the workforce— and there was probably little in the way of training investment, coaching, and mentoring to keep them there and get them through the rough patches.

What about Millennials just entering the workforce out of college? According to Mike Brown, and the “The Class of 2018 Career Report” conducted by LendEDU, 41.3% had already found a job, and of those, only 37% envision staying at that same job for over 3 years. 28% of those who had found a job envisioned staying at their job for up to 3 years, while 25% thought they would last 6 months to a year and 10% said they would leave as soon as something better came along (click here for the full study at LendEDU). 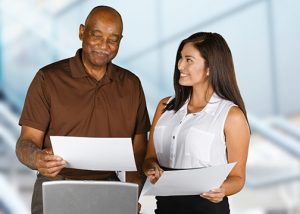 The research points to the fact that younger workers are leaving your company not because they are “Millennials.” They are leaving because they don’t see the career path and opportunity they’re looking for, and they may indeed have higher expectations, or they simply need guidance. They may have been thrown into a position without proper onboarding or training and are learning simply by making mistakes, which can be soul-crushing. In a recent Udemy “Workplace Boredom Report,” 46% of employees are looking to leave their companies because of a lack of opportunity to learn new skills. This is when a more experienced and wise counterpart can provide the training, skills, career/life guidance, coaching, and patience that can help them learn the position, see their fit within the company, adapt to the culture, and see a future.

Do you have a mentoring program? There is a wealth of company, industry, and subject knowledge in older workers that Millennials can tap into and that employers should value. Programs that enable knowledge transfer and connect younger and older workers have been found to have a high return on investment because of the impact they have on increasing retention rates, promotions, and overall employee satisfaction. There is also a benefit in reverse mentoring in which older executives are paired and mentored in turn by younger employees on technology, social media, and trends. After all, what organization couldn’t benefit from a free exchange of ideas, wisdom, and engagement between employees in different generations?

If they are too old they will cost too much compared to younger employees and they will go slower and be less productive. What about health and shouldn’t they be thinking of retirement around 65? After all, isn’t that when Social Security kicks in? Older folks are simply too set in their ways.

The concept of retirement is changing in America. Many are now working into their 70s and 80s. There is the concern, and maybe it is due to poor financial planning, that when they retire they may not have enough saved to live on. However, in many of our conversations with older candidates, like our 61-year-old, we find it is more of a fear of having nothing to do when they retire. She relayed to us that she wanted to work another 10-15 years when the employer was thinking they would be happy to get another 4-5 years before she retired.

Ageism, or discriminating against an employee (on the job or in hiring) based on someone’s age, continues to grow. According to the AARP article, “10 Things You Should Know About Age Discrimination,” “two out of every three workers between ages 45 and 74 have seen or experienced age discrimination at work, and job seekers over age 35 cite it as a top obstacle to getting hired.” In addition, age discrimination complaints brought to the EEOC have increased 26% in the last decade alone. Many resumes we see from older candidates are just dropping the first 10 years of their work experience altogether and not putting a date by their education.

You may have your own experience of the 75-year-old co-worker who is always the first to arrive every day, often the last to leave, never gets sick, and simply enjoys their job. After all, does it make a difference how old the person is if they can get the job done well? Does age matter when performance compared to younger workers is the same or better?

What about compensation? It’s true that due to the length of time an employee has at a company, they would stand to make more than a younger employee brought in as a replacement. However, expanded learning curves, lost productivity and the fact that we are in one of the biggest “candidate’s market” in years could ultimately make hiring and/or retaining older workers a bargain. For the first time in decades, there are actually more job openings than unemployed Americans who can fill them. Employee health and retirement at the wrong time are always valid concerns, however, those are increasingly balanced by higher costs of turnover from a younger workforce.

Here is a video from AARP that tends to put it in perspective for younger and older generations alike. There is always more than meets the eye and our misconceptions can be detrimental to a growth opportunity that is right in front of us.

Growth Through Experience and Wisdom

AT&T, with one of the largest workforces in the world, is now boldly spending over $1 billion on retraining and “re-skilling” a large portion of their aging workforce. This is due to the high cost of turnover and the need to keep valuable “knowledge and experience” in place. According to Anthony Carnevale, Director of Georgetown University’s Center on Education and Workforce, “When you have workers that already possess much of what you need, it makes a lot more sense to retrain them than to go out and hire new workers—who may be more educated—and then wait a year or more for them to get up to speed with how the company operates.” Carnevale goes on to state that long-time employees at companies like AT&T “already have two to three tiers of skills because they’ve learned the structure and culture of the institution.”

Keeping and hiring older workers, and their “experience and wisdom,” will fill the talent void, help companies retain younger talent, reduce turnover, and will ultimately be critical to the long-term success and future growth of the organization.  It is time for business leaders and hiring managers to shift their thinking and understand that age is not about decline – it is about growth. The growth that “experience and wisdom” can bring to your company today, and through coaching and mentoring, the growth it can bring tomorrow.

If your company is ready to strategically address, improve and invest in the hiring of the most important part of any company – it’s people — contact us today! 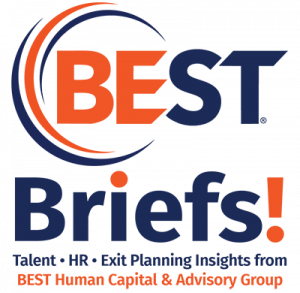