Last July, Illinois Governor J.B. Pritzker signed into law a bill that prohibits employers from asking a candidate for their previous job salary history. Illinois is not alone. In the U.S., there are currently 17 statewide bans and 19 local ordinances that have acted against discussing salary history. With more states adopting these practices in the next 6-12 months, the question of “why?” comes to mind.

Some municipalities, like Philadelphia, are choosing not to follow this mandate, arguing that taking away this question was inhibiting an employer’s First Amendment right to free speech. The fact remains that asking a candidate for their salary history allows for discrimination and does not always provide the top-quality candidate that companies spend thousands of dollars trying to find.

As business leaders, hiring managers, and recruiters, we have to ask ourselves— is knowing a candidate’s salary history all that important? After all, we have a set compensation range (low-mid-high) that we have budgeted for an open position. If a candidate meets and exceeds the requirements, qualifications, and behaviors for the role and fits within the compensation range, does it matter?  After all, both the employer and candidate win. Maybe the employer doesn’t get the “deal” they wanted or lower their expenses by getting the candidate for less than the compensation range. The candidate may also get a lot more in compensation than they received in their last position. Is that an adverse outcome? Or could it have the effect of engaging and motivating the new employee to increase his or her performance?

Think back to your last interview. You were probably a little nervous being the center of attention, knowing that one key answer could land you a job or send you back to the drawing board. You did your research on the role and knew the range a prototypical person in this position would make, but the company has not divulged their compensation range for the job. Then they ask the dreaded question, “How much are you currently making, or what did you previously make?” Most employers assume these guided questions are to measure compatibility between past and future positions. However, for many candidates, this question feels like a trap. If the current salary is too high, the candidate could be pushed aside for being overpriced or overqualified. Indicate a range that is too low, and the candidate might receive less than the value of the job. There are also ethical questions at work. 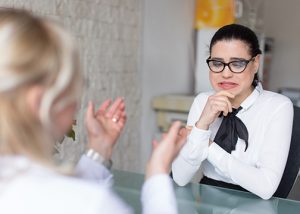 When examining questions regarding salary history, there is an opportunity for labor compliance violations. This question allows for disparate impact, which unknowingly discriminates against a group of people, especially women when compared to men for the same position. According to Business Insider, a Hispanic woman makes 53% of what a white male makes in a given year. These statistics vary by state, as some have enacted policies to close the wage gap, but the average data shows that this gap is still very much alive. Assigning a salary based on past employment earnings continues errors of the past rather than righting a wrong and determining the adequate compensation based on the position and responsibilities it brings. By creating laws prohibiting employers from inquiring about salary history, many states feel they are taking a step toward complying with the Federal Equal Pay Act of 1963 and attempting to close the wage gap.

How do we move forward and continue to find ways to make sure the candidate matches the role if salary history is now out of the equation? Carolyn Cowper, V.P. of Performance and Rewards with The Segal Group in New York City, advises, “Shift the conversation to the candidate’s salary expectations rather than salary history, then move on to focus on the candidate’s skill set and qualifications for the role.” Recruiters now feel it necessary to ask the candidate what they think they are worth — taking a net worth of all their talents, experience, and assets that they will bring to a new position. For example, one person could make twice the salary of another but only have half of the work ethic and drive.

When you take a deep dive into the backend of the hiring process, we see that salary history tells us very little. In a study done by Workplace Culture, they reported that 86% of millennials would take a pay cut if it meant working at a company with a better company culture. Work-life balance, a culture of advancement, and education reimbursements are often more important than compensation to today’s candidates. As a business, it is in your best interest to find people that share similar values and goals to help grow the company into the future.

The Market is Speaking

Many states agree that it does not matter how much you made in your past job. You should, instead, be getting paid the market price of the current position. Candidates should take it upon themselves to research the standard salary rate before going to the interview, and employers should also monitor this as well to see if they’re competitive. There are many online sources for these statistics (Salary.com, Glassdoor, and PayScale). Company leaders, hiring managers, and recruiters should ask the question by taking a “Total Rewards” approach: What is your desired base salary? Bonus? Benefits? Vacation? Other rewards (for example, educational reimbursement) and then let the discussion progress from there.

As record low unemployment continues, and there are less skilled workers available for more increasingly skilled open positions, there are already hiring and employment trends happening that would have been unthinkable just 5-years ago — retention bonuses, extraordinary counteroffers, and even limiting background checks. Even Non-Compete Agreements are on the block. They are already not enforceable in 4 states (including California), and resistance is growing with a Senate bill introduced last year looking for a nationwide ban. In such an environment, it stands to reason that asking for a candidate’s salary history and other employer-favored actions will become history. Be prepared.

To Be Strategic or Transactional? That is the Question March 3, 2021

The Case for Human Resources in Strategic Planning Ask most business leaders and professionals, and...

We recently sent an email to our BEST BRIEFS newsletter subscribers on the topic of ageism, and it d...